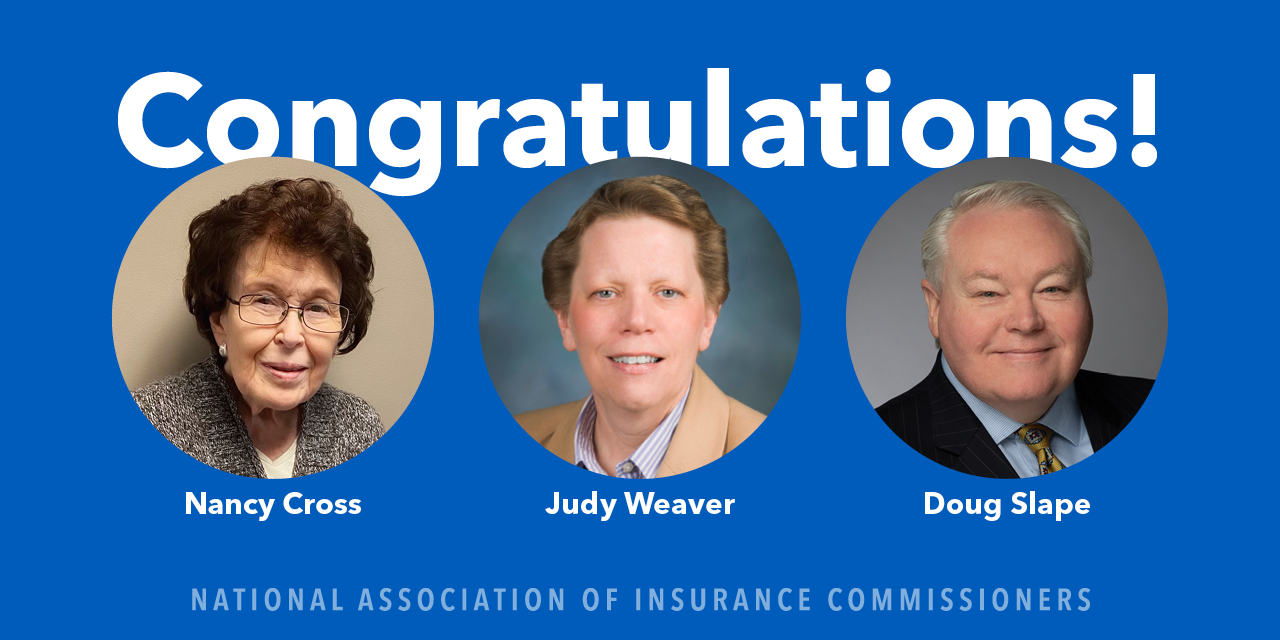 The three recipients were awarded the distinguished honor during the opening session of the NAIC’s Fall National Meeting.

Nancy Cross joined the Mississippi department of insurance in December of 1958 as the administrative assistant to the Deputy Commissioner. She has served under four different insurance commissioners and has risen through the ranks to become the Statutory Compliance Director where she is responsible for issuing new and renewing licenses for insurance companies, health maintenance organizations, societies and associations doing business in the state of Mississippi. Early in her career, Nancy was an initial member of the local chapter of the National Association of Insurance Women, which aimed to provide education to members working across various fields of the insurance industry, including underwriting, adjusting, and customer service. Nancy helped craft an insurance company licensing registration system for the department, which was designed to ensure all company licensing fees, and applications were collected in an efficient and timely manner. She was also part of the team that helped implement the NAIC’s UCAA process in Mississippi, which remains in effect today.

Doug Slape has spent more than 30 years working to improve solvency regulation and providing a powerful and reasoned voice to maintain the integrity of Texas’ state-based system of regulation. Slape’s service includes leadership positions in many NAIC groups. While chair of the NAIC’s Captive and Special Purposes Subgroup, Slape supported the writing of NAIC’s first white paper on the use of captives in the U.S. And following the 2008 financial crisis, Slape was instrumental in developing enhancements to the solvency regulation framework, which have been included in the Accreditation Program. Among his achievements, Slape led an initiative at the Texas Department of Insurance to automate the review of quarterly financial filings to address the complexity of the risk-focused supervision process that was quickly evolving. This process is recognized in the NAIC’s Financial Analysis Handbook, and many other states have followed Texas’ approach.

Judy Weaver has served the state of Michigan for more than 30 years. During her career, she served as a field examiner for insurance companies and has worked in financial analysis, company licensing and receivership of insurers, and market regulation of managed care entities. Weaver has also served as Deputy Director and Chief Examiner. Her financial expertise and regulatory discipline have allowed her to contribute key insights across the financial arena and to several NAIC Working Groups, including chairing the Financial Analysis Solvency Tools working group and the Financial Analysis Working Group.

Weaver has been an integral part of Michigan’s solvency regulation framework assisting with the implementation of solvency requirements ranging from risk-based capital to group supervision to enterprise risk-focused analysis and examinations. She has proven to be an insightful and diligent member of these groups, offering thoughtful comments which produce productive outcomes, while not only looking out for the wellbeing of her home state of Michigan, but the insurance regulation community at large.

The Robert Dineen Award was established in June of 1989 for Outstanding Service and Contribution to the State Regulation of Insurance and named in honor of the founder of the NAIC’s Support and Services Office.