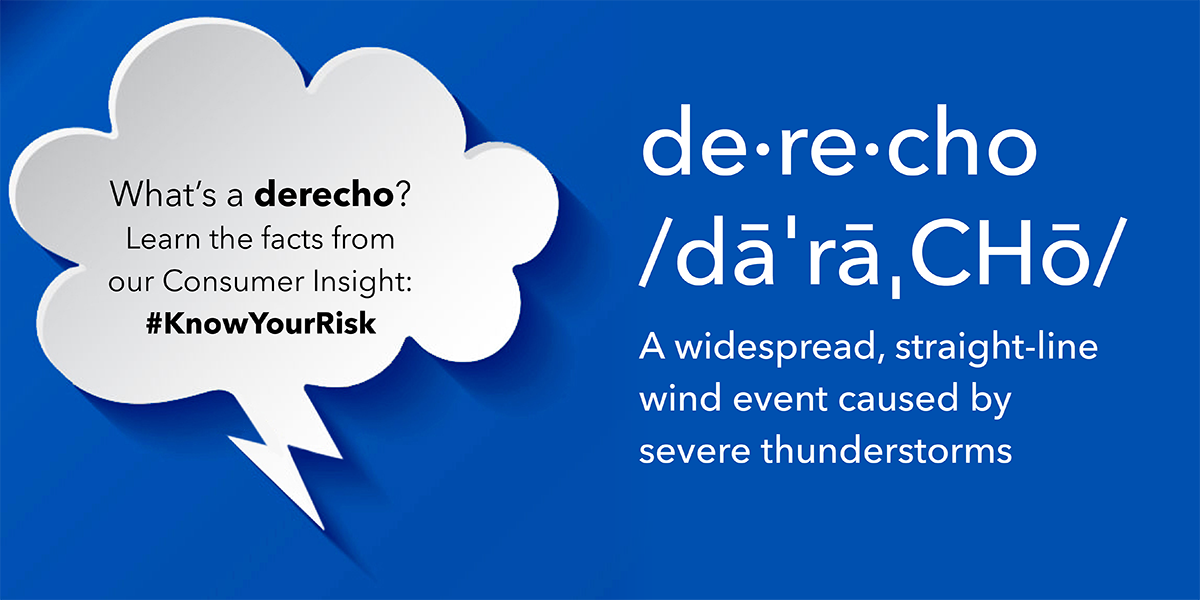 Learn the Facts About Derechos

A derecho (de·re·cho) is a widespread, straight-line wind event caused by severe thunderstorms. Because of how quickly derechos happen and the length of time they last, there is not much time for preparation, making them uniquely dangerous. According to the National Weather Service (NWS), derechos cause more deaths than EF0 and EF1 tornadoes combined.

Derechos can be deadly. The speed at which the wind travels means little to no preparation time and is why derechos can be so dangerous. The winds of a derecho travel at least 58 mph and have been recorded as high as 130 mph, according to the NWS.

Damage from derechos happens along a straight path. Derecho means “straight ahead” in Spanish. Unlike tornados, which rotate, derechos move in a straight line and are described as “walls” of wind. Derechos have been known to happen in groups. When a derecho occurs, others may follow in the next few days in different locations.

Prepare for derechos as you would prepare for a thunderstorm. You can do this by going inside, avoiding landline phones and unplugging electrical appliances. The NWS will issue a severe thunderstorm warning ahead of a derecho.

Outdoor exposure causes higher risks. Remember, there is not much preparation time for derechos. Because of this, people who are outside without access to shelter, like campers and hikers, are at an increased risk.

Almost half of the deaths caused by derechos happen in cars or boats. Boats and cars are likely to be overturned by the high winds.