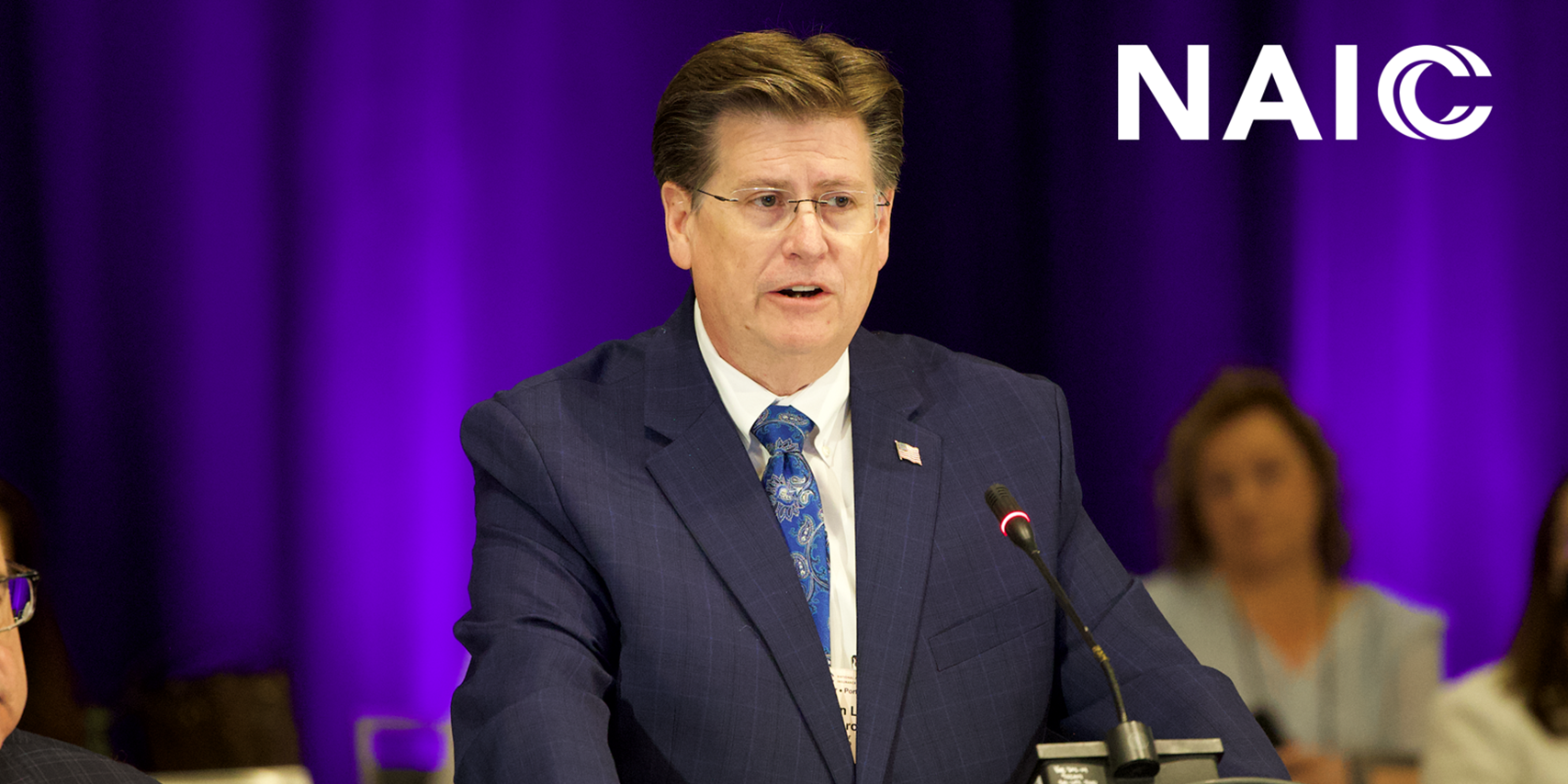 Before I begin, I do want to take a moment and recognize several of our colleagues who have faced severe natural disasters over the past few months.

Sharon Clark from Kentucky, Russell Toal from New Mexico, Troy Downing from Montana, and certainly Chlora Lindley-Meyers from Missouri and Ricardo Lara from California have all faced difficult situations as you try and protect and work with your consumers and be there for them.

Handling natural disasters is an important part of the work that we do in protecting our consumers.

Thank you to you for your efforts, for helping your constituents, and for the fellow regulators who have stepped up to help you.

It feels like yesterday that I took office as president.

Honestly, my head can hardly comprehend how fast the first eight months have gone.

What I can digest is three things:

Speaking of what's been accomplished, I’d like to call out a few efforts.

I will tell you that every time I go through the list, I think of other efforts, and so there are some that I’ll add as we go.

We have made great strides in our State Connected Strategic Plan.

One of our main goals was a strategic and successful launch of the “H” Committee.

We have been successful in that, thanks to the efforts of many of you but particularly [Maryland] Commissioner [Kathleen] Birrane. We just held our first-ever Collaboration Forum, and it focused on artificial intelligence and algorithmic bias.

We have stronger relationships with our legislators, although improvement is still needed, and with our stakeholders. Improvement needed there, as well.

We have advanced, discussed, as Commissioner Stolfi mentioned, in a non-partisan way, difficult and complicated issues. Issues like climate and resiliency; diversity, equity, and inclusion; long-term care; and private equity.

We have successfully defended the state-based system and have provided leadership on a host of issues, either by writing thoughtful, insightful letters to members of Congress and our federal partners or by advocating in person on issues such as:

We held our successful, in-person International Forum, where we delivered a firm message to our international friends that then yielded improved communication and needed concessions.

We did a media tour with 24 news outlets, which culminated in over 18 million views.

And we have submitted the request for our NAIC Foundation to the IRS to be approved.

I am incredibly grateful for each of you. Your support and kindness to this not-so-talented potato head has been really remarkable.

Your support, even when you didn't get everything that you asked for.

Your leadership in difficult times, despite criticisms and obstacles. And your professionalism, as you navigated sometimes conflicting perspectives but looked for understanding.

Your inspirational defense of our state-based system and the benefit of allowing states to protect their citizens in the way that best fits them.

I am truly humbled to serve with you and honored to collaborate with you.

Now, we have plenty to do, and our citizens need our perseverance. We   have barriers to discuss and either eliminate or mitigate. We can still streamline and eliminate antiquated systems and regulations, and we have improved oversight and accountability. But we aren't done yet.

We have lots of work to do around items like financial education and literacy.

We're going to do another media tour to warn against inappropriate marketing practices related to open enrollment and Medicare.

Four months, three weeks, and five days - who’s counting? - seems too short. Maybe Chlora is counting. I don't know. And I know some of the efforts that we have started will continue under her excellent leadership.

However, my hope is to encourage you that we continue with our best efforts through the end of the year.

As I contemplated the inspiration to complete our goals, I thought of several great men and women who have seemingly accomplished the impossible.

There are no shortages of inspirational stories. In fact, it was more difficult to narrow the stories down than it was to find them or to think about them.

I’m sure you can and will think of other stories, but I've chosen three that I want to share with you today.

Branch Rickey, owner of the Brooklyn Dodgers, decided to help break that barrier, while helping his own team.

After scouring the Negro League, Mr. Rickey found his player. In 1947, there was one African American professional baseball player, an American hero.

Jackie Robinson busted racial bias as he became the first African American to play in Major League Baseball in the modern era.

That one player and that owner had to stand against scorn and ridicule to break that barrier.

Jackie Robinson's number, number 42, is the only number retired by all of baseball.

We learn perseverance. We learn following our dreams. We learn turning the other cheek.

We learn self-control and rising above some of the obstacles.

We learn that greatness is a matter of internal character and not a matter of appearance.

In September of 1849, Harriet Tubman, another American hero, escaped a Maryland plantation.

And, with the help of God, she navigated the treacherous 90-mile trip to freedom.

She could have stopped there.

Harriet Tubman decided to return for her family, after having a dream to do so. And over 10 years she stood against all odds to free her family and other slaves.

It is believed that she assisted in freeing 70 men and women from slavery via the underground railroad. But she went beyond that. She broke barriers one slave at a time.

Even her supporters urged her to stop. They told her it couldn't be done. They pleaded with her not to go back. They feared she'd be captured.

She later led 150 soldiers in the Combahee Ferry Raid, which freed 750 slaves.

Harriet remains as one of the few women in U.S. history to lead an armed expedition.

Later, Harriet dedicated her life to helping those freed slaves, the elderly, and Women's Suffrage.

Harriet not only faced bias and other criticisms, but she faced barriers and difficulty from within her own race and perhaps because she was a woman.

We learn from Harriet courage, determination, reliance on prayer, selfless service, willingness to put herself in danger and risking being recaptured to save another.

There is no greater love than that of serving another.

Another hero that I chose to mention today is David from the Old Testament.

Many of you know the story. But, just in case you've forgotten, or like [Commissioner] Gary [Anderson], it's been a while since you've been to Sunday School. Let me recount a bit. Sorry, Gary.

Israel was under attack from the Philistines.

And David was probably shorter than David Altmaier.

Not drawing too many parallels.

David had brothers who were supposed to be fighting in the battle. So, David's parents sent him to the front line to bring his brothers food.

David found his brothers and all of the army hiding while Goliath was challenging someone to fight him.

Goliath was insulting not only their country, their family, their heritage, but also their relationship with their God.

Troubled by this, David saw an issue that needed addressing. David went to the king.

He spoke to the king, and he volunteered to go fight Goliath. I'm sure the king had to question how this 14-year-old boy, I don't remember if he was 14 but in that age range, could do this.

The king was obviously trying to figure out what to do.

But David was certain of his abilities, having slayed a lion and slayed a bear before.

He shared that with the king, and the king then agreed. And they loaded him up with armor, I'm told 150 pounds of armor, which David removed realizing it would slow him down. Instead, he carefully selected stones from a stream.

And as David came forth to fight Goliath, Goliath laughed and again mocked Israel and his opponent.

Of course, we know that David was deadly with his aim, as he sank a stone into the forehead of Goliath and then beheaded Goliath and displayed it for all of the Philistines to see.

What can we learn from David?

Of course, we learn courage.

The willingness to stand when needed and to recognize a cause for which we need to fight for.

We can learn confidence in our own abilities, for which we have been trained and practiced.

We can learn to trust in the Lord.

We can learn the importance of the right tools, carefully choosing our stones and not being weighed down with unnecessary armor.

As we tackle the challenges of the next four months, may we have the courage of David and Harriet.

The perseverance of Jackie and Branch. The confidence and faith of David. The self-control of Jackie.

The serving heart and strength of Harriet.

The valor of David as we defend our honor and our role and our responsibility to regulate the industry.

The foresight and the vision of Harriet, Branch, Jackie, and David, who saw a cause and took action for a better future.

My fellow colleagues, our cause is clear.

We have the privilege to regulate an industry which provides hope, security, and opportunity.

Let's create a better future for all of us by building on our successes.

I look forward to working with you over the next four months to protect that privilege that we have to regulate.