Issue. The Affordable Care Act of 2010 (ACA) established the first minimum medical loss ratio (MLR) standard for many private market health plans and insurers (there were MLR requirements for Medicare Supplement policies before the ACA). The goal of the MLR standard under the ACA is to restrain premium growth by limiting the profits and administrative costs of health insurers. The ACA requires health insurers in the individual and small group markets to spend at least 80% of their premium revenues on clinical care and quality improvements. For the large group market, the MLR requirement is 85 percent. The ACA requires these plans to provide annual rebates to policyholders if they do not meet MLR requirements.

Overview. The medical loss ratio (MLR) is the share of total health care premiums spent on medical claims and efforts to improve the quality of care.[1] The remainder is the share spent on administration costs and fees, as well as profits earned. Section 2718 of the Public Health Service Act (PHS Act), as amended by the ACA, requires health insurance issuers to annually submit an MLR report to the Secretary of Health and Human Services. If the issuer’s MLR is less than the applicable percentage established in the PHS Act (three-year rolling average), it is required to issue a rebate to enrollees. The MLR rules became effective on January 1, 2011.

For individual and small group insurance plans, an annual minimum MLR of 80% is required by the ACA or otherwise, the insurer must rebate policyholders. Large group insurance plans are required to have a minimum MLR of 85%. The MLR is based on an insurer’s annual aggregate financial allocations within each market (individual, small group, or large group) and state. The MLR does not extend to self-funded health insurance plans, which are plans for which the employer is responsible for the payment of covered claims; “mini-med” plans, which have total annual benefits of $250,000 or less; or expatriate plans (45 CFR § 158.120). 45 CFR § The Secretary of Health and Human Services may adjust the MLR standard for a given MLR reporting year if there is a “reasonable likelihood” that an adjustment to the 80 percent MLR standard would help “stabilize the individual market” in that State (45 CFR § 158.301).

Average MLRs rose significantly from 2011 through 2015, then plummeted by 2018. For example, in the individual market, the average MLR climbed from 80% in 2011 to 103% in 2015 (Figure 1). By 2018, the average MLR had fallen to 70%. Although the average MLR returned to 79 percent by 2019, it may be much lower in 2020 due to deferred care during the early months of the COVID-19 pandemic and associated reduced medical spending by health insurers. On the other hand, some deferred care could be recouped in 2021 and 2022, which may push MLRs upward in those years. 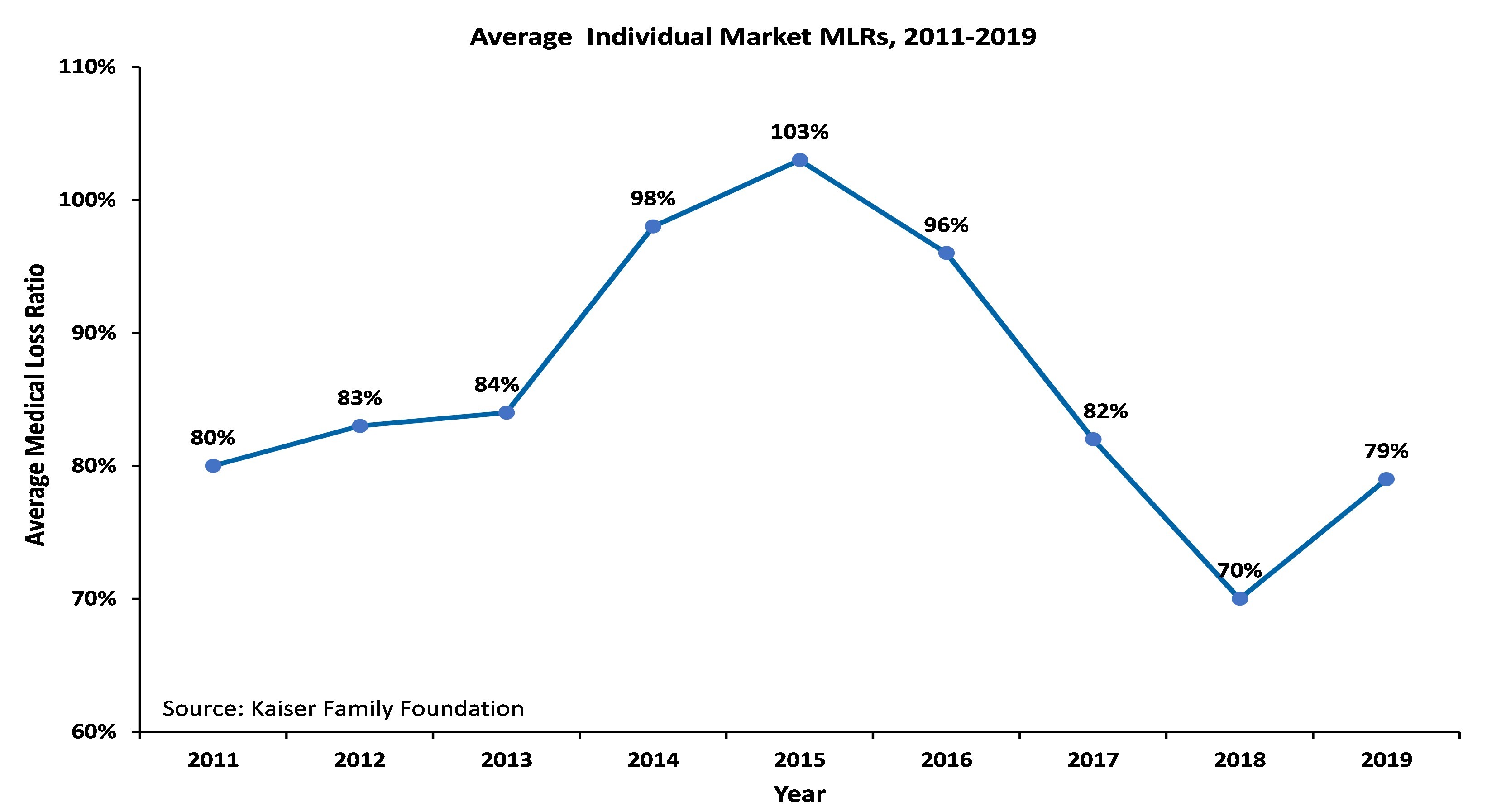 In 2012, insurers rebated 8.5 million consumers a total of $504 million (average rebate of $98/family), according to the Center for Consumer Information and Insurance Oversight (CCIIO).[2] These totals were significantly lower in 2015 when insurers rebated about 4.9 million consumers a total of $397 million (average of $138/family).[3] MLR rebates are based on a 3-year rolling average. Thus, 2019 plan year rebates paid in 2020 were calculated using insurers’ financial data for 2017, 2018, and 2019. Total rebates in 2019 reached a record $2.5 billion to 11.2 million consumers (average $219/family). A policyholder does not receive a rebate if their insurer met the MLR requirement.

Status. The ACA requires the NAIC to establish uniform definitions and standardize methodologies for calculating the MLR and rebate amounts. A Medical Loss Ratio Blanks Proposal was approved by the NAIC full membership in 2010 in order to capture detailed information that can be used by regulators to gain a directional sense of a company’s MLR prior to the actual MLR calculation that is submitted by insurance companies through the Health Insurance Oversight System (HIOS) later in the applicable year. Annual Statement Blanks are the actual forms submitted by insurance companies to report financial information to state regulators.

[3]By 2015, rebates were issued based on a three-year rolling average of the MLR, which explains the apparent discrepancy in totals and per family amounts compared with 2012.

Committees Active on This Topic

Do Health Insurers Manage Their Medical Cost Ratios? At What Cost? (Journal of Insurance Regulation, 2021).

Media queries should be directed to the NAIC Communications Division at 816-783-8909 or news@naic.org.